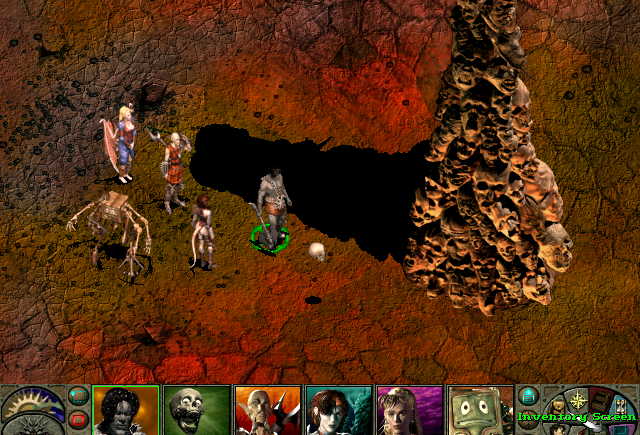 Most fantasy RPGs follow the tried and allegedly true formula, which strips them of anything ‘fantastic’ and grounds them in the dull ‘reality’ of the familiar. Sadly, the much coveted instant recognition usually means instantly forgettable. How many times should we save an utterly predictable and generic world before it gets really old? Why is that when we see a town on the horizon, it’s not a place of wonder and strange customs, but a place to restock on fedex quest and trade in your loot?

Now compare it to Planescape: Torment. You wake up in a mortuary. Dead. A gravity-defying skull starts chatting with you, making it clear that you aren’t in fantasy Kansas anymore. The rules are completely different and you have no idea what they are yet.

Where are the familiar elves and orcs – the foundation of quality storytelling? Why isn’t an ancient evil stirring? Where is a kind lord of the realm to send you on a mission of great importance? Why your character isn’t a dashing young hero, destined to be awesome, but a scarred, formaldehyde-soaked corpse, cursed with immortality?

You open the door. Zombies are crawling everywhere, yet it’s not a zombie apocalypse. The zombies mind their own business; in fact, they are nothing but indentured workers whose bodies were sold to the Dustmen, one of the many colorful factions in the game. You can attack the zombies if you’re a creature of habit, but you can also walk around, studying the undead, and even get very unusual items from them.

When you finally manage to leave the Mortuary, you find yourself in a most unusual city. It’s a city of doors, filled with hidden portals that can take you anywhere, assuming you have the right key – which can be anything from a jewel to literally junk.

You make your way to a bar: a familiar place in this strange land. The very first thing you see is a burning yet still alive man floating in midair – a rather unusual conversation piece of decor. Some ugly looking demons are having a drink, greeting you as an old friend. The bartender casually informs you that he still has your eye – it’s right there, floating in a jar like a pickled egg – and if you have some coins you can have it back.

You buy the eye, not because you need it, but because it’s so shockingly different from the usual selection of RPG goodies, wondering what the hell one does with an eye that belonged to your earlier incarnation. Guess what, you get an option to rip out one of your current, perfectly good eyeballs and replace it with the pickled one, because why not?

Somehow it works and your old memories start pouring in. At this point you’re absolutely lost. You, the player, are a stranger in a strange land and that’s a rare and precious moment in gaming.

You’ll travel an interesting world (while the setting is a licensed oddity, it takes considerable skills and talent to turn an obscure, dusty IP into a one-of-a-kind world ready to be explored). You’ll read a great story with philosophical undertones – a rare treat in video games. You’ll meet best party members I’ve ever seen in a computer game, and you’ll have fantastic dialogues and complex dialogue trees 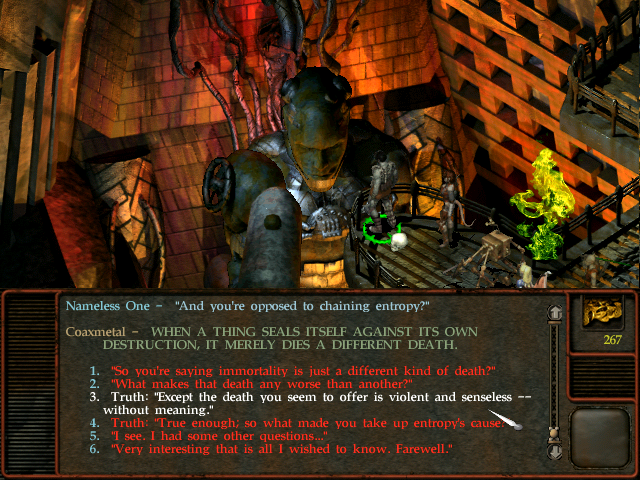 On the downside, despite featuring over 800,000 words, you have to fight a lot because apparently killing things to level up (and grinding to put more points into Wisdom and Charisma to unlock more awesome dialogues) is what players can’t get enough of.

All this mindless slaughter is powered up by a rather underwhelming RTwP system that comes with the Infinity Engine. On the plus side, it has spectacular spell animations inspired by Final Fantasy VII, so if you get bored watching toons whacking each other, cast one of the spells and watch the fireworks.

Speaking of Final Fantasy, it can be argued that Planescape: Torment, um, homage to Japanese RPGs goes a bit deeper than the spell effects and that it is, in fact, a JRPG cleverly disguised as a WRPG to confuse players who are too cool to play console games.

Fortunately, the story, dialogs, and characters are so good that even if you hate RTwP with passion or laugh at people who cried when Aeris died, you’ll still love the game and wish you could lose your memories to experience it all over again for the first time. Vault Dweller 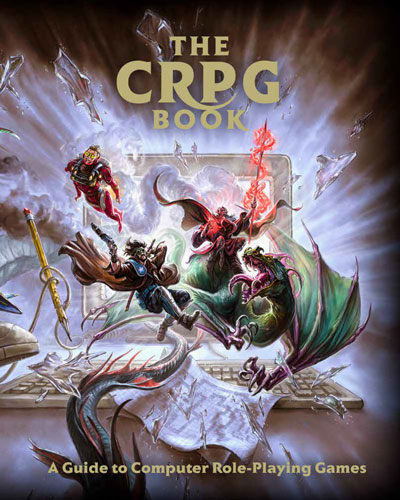